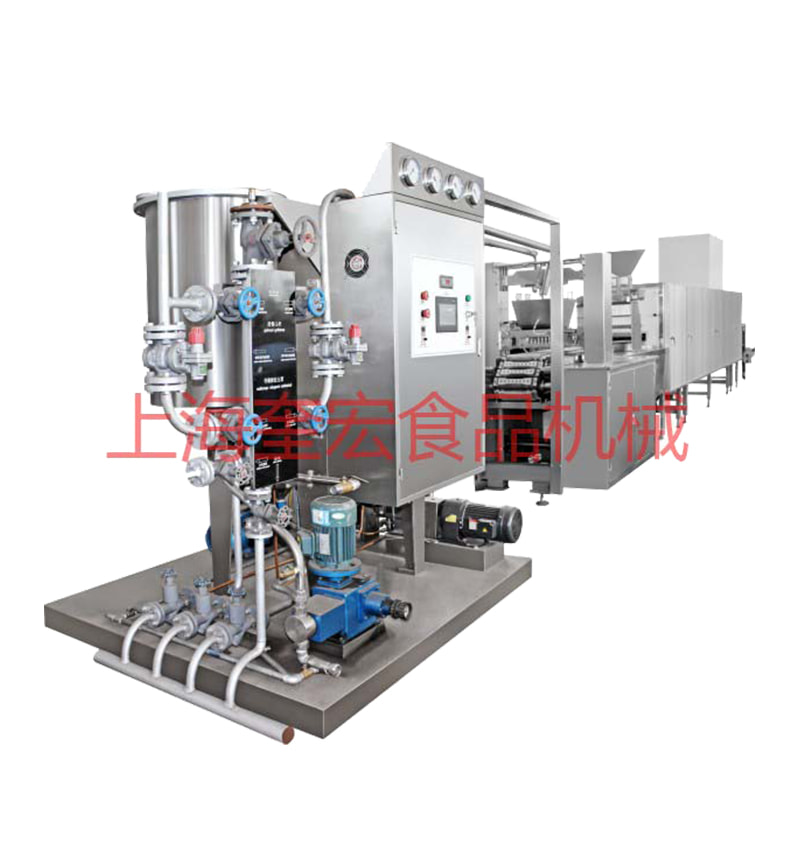 Hard candy: Low boiling temperature and insufficient vacuum will cause high moisture in the sample. The speed of putting the sugar into the vacuum pot after concentration is too slow. Once the vacuum is applied, the syrup will become silky or crust on the surface of the boiled massecuite, which will bring trouble to the cooling seasoning process. Failure to filter effectively when dissolving sugar, coking of the heating tube for boiling sugar, and failure to clean regularly, poor quality of raw and auxiliary materials, and failure to clean the pouring hopper and template of the pouring machine will cause the sample to contain impurities and darken the color. The uneven thickness of the sugar sticks, the pressure wheel is not in place, the stem wear is uneven, or the pouring nozzle is blocked, and the pouring rod wears unevenly, which will cause the sample particles to be inaccurate. The massecuite should be cooled from the surface to the inside, and from time to time the metal rod is used to press from the inside to the outside. If the operation is not performed according to this specification, air bubbles will naturally be formed. The massecuite should be moderately hard and soft (about 80°C) when cooled, and it can be kept warm when it has the greatest plasticity. Too cold is difficult to stretch, the surface of the sugar particles will be rough, hairy, dull, and incompletely cracked; too soft and easy to stick to the insulation bed and die, and even cause production interruption. Therefore, during the trial production of samples, the operating procedures for sample trial production should be formulated to avoid the occurrence of violations of the operating procedures.
The sauce heart syrup heart candy is easy to violently stuff and break the skin is caused by improper process selection. In addition to manual core-packing, which is easy to cause such phenomena, the use of rollers to stretch the strips and pump the core material, if the core material is injected too much, it is also easy to produce violent filling and broken skin during the subsequent process of stamping or crimping. phenomenon. If the temperature difference between the sugar crust and the core material is too large, it is not easy to form the core. If the temperature of the syrup is too high, not only is it easy to stick to the die, but it is also easy to cause the syrup to crack and reveal the filling. Using the pouring molding process, if the process is improperly operated, the phenomenon of filling and breaking will also occur. The main reason is the stability of the core material. The boiling temperature of pouring hard candies is 140°C, and the temperature during pouring will not be lower than 130°C. The moisture in the dispersion medium of the core material with poor stability will instantly boil and vaporize and cause the blast to break. The prevention method is to solve the stability of the core material, and the key to satisfying the stability of the core material is temperature, concentration and viscosity.
As the cooking temperature increases during the cooking process, the milk fat mixed slurry becomes thicker and thicker, and the rheology becomes lower. If the boiling pot does not have a stirring device, or if the stirring device and the bottom of the pot are not well matched, it is easy to cause sticking and coking, and even a burnt smell or small black spots in the finished product. Therefore, it is generally required that the stirring device is equipped with a bracket, and has no gap with the bottom of the boiling pot. The boiling time is too long, the moisture content is too high, and the sample sticks to the teeth with a darker color.
The preparation of gelatin sol or jelly should be soaked and swelled in water first, and then heated and steamed in a jacketed pot or water bath. It is best to use a vacuum boiling pot to prepare it. For example, it is difficult to control the temperature, and the freezing power is often damaged due to the high temperature. It will also be easy to coking and produce a burnt smell due to the high viscosity. use.
Inflatable candy cooking equipment should be selected according to the specific variety. Vacuum low-temperature cooking equipment should be selected. Otherwise, it will not only delay the cooking time, but also deepen the color of the sample and reduce or even lose the original flavor of the original product.
In addition to reasonable material composition, the physical system and texture characteristics of aerated candy are mainly formed by agitation and aeration process. If the equipment is not matched, the uniformity of the material distribution, the generation of dense bubble groups, the multi-phase dispersion system and the required texture can not be formed well. Even if it is formed, it is impossible to be stable. Once the external conditions change, the quality of the sample will vary greatly. It is best to choose a Dutch-style improved vacuum low-temperature cooking and stirring aeration equipment. Marshmallows should choose a continuous aerator instead of always using a vertical mixer. The effects of the samples obtained by the two different aeration devices are different.